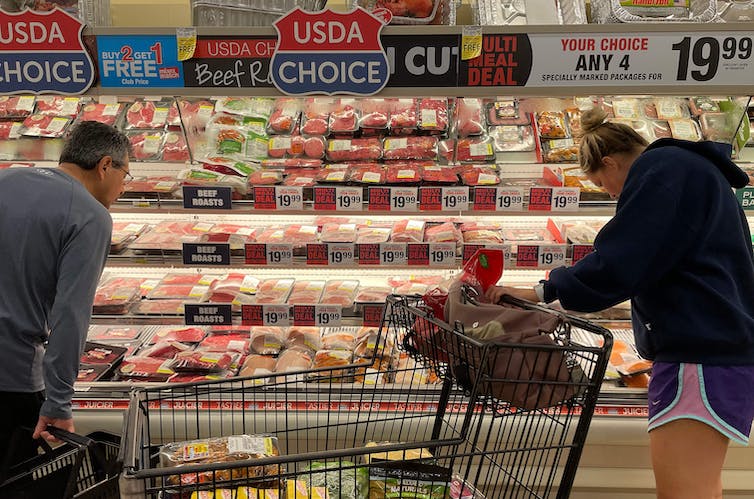 The cost of eggs and bread is soaring – a trend that’s particularly punishing for the poorest Americans.

Average food prices climbed an annualized rate of 10.4% in June, the Bureau of Labor Statistics reported on July 13, 2022. The gains were driven primarily by the cost of groceries, which jumped the most since the 1970s, by 12.2%. Overall inflation was up 9.1% from a year earlier.

These sharp increases have startled consumers, in large part because food costs had been rising moderately for decades.

While all Americans have seen their grocery bills swell, many may not fully appreciate the enormous burden that rising food costs pose for low-income households. The reason is simple: Poor families spend a much larger share of their income on food than the median household.

In 2020, the average middle-income American family spent roughly 12% of its earnings on food. In sharp contrast, poor households spent 27% on food that year.

What explains this enormous discrepancy? The answer begins with a dramatic change in spending patterns among American households during the 20th century, which I learned while researching shifts in commuting practices.

In the 1900s, the bare necessities of life, including food, were enormously expensive compared with today, leaving little room for spending on other goods or services for most Americans, according to a 2006 study by the Department of Labor. On average, American families spent over 40% of their income on food in 1901, 23% on housing and 14% on clothing.

But the relative cost of food and clothing decreased steadily over the next 100 years. By 2002, the two categories represented only 17.3% of a middle-class family’s expenditures and by 2020, the figure had fallen to 14.2%.

The sharp drop in the cost of food and clothing led to a massive reshuffling of family budgets over roughly the past century. As people reduced their spending on these items, they spent more on housing, transportation and insurance. As the country became wealthier, discretionary spending increased, too. Most Americans had more room in their budgets for eating out, televisions and entertainment.

This revolution in household spending largely excluded poor Americans, who continue to devote most of their income to feeding their families and other necessities like shelter. As a result, they are particularly vulnerable to spikes in food costs.

Low-income households devote more than twice as large a share of their budgets to food as middle-income households. As a result, food inflation is around twice as burdensome for families of limited means. But this actually understates the burden of high food costs on the poor because, unlike middle-class families, they have little discretionary spending they can pare back to free up funds for food.

American households are responding to soaring food inflation by eating out less frequently, buying generic brands and consuming less meat. For many, it may be the first time they’ve ever had to be so careful about what they spent on food.

Poor families, however, have long been forced to deploy these tactics to keep food expenditures in check.

An estimated 38 million Americans are food insecure, meaning that they have insufficient means to obtain sufficient food. The concern is, with food inflation rising at the rate it is, more families will face the prospect of being unsure where their next meal is coming from.

What is involuntary manslaughter?

Why America has a debt ceiling: 5 questions answered

Why You Should NOT Fear Death

How has the inside of the Earth stayed as hot as the Sun’s surface for billions of years?