When Zaila Avant-garde, 14, won the 2021 Scripps National Spelling Bee on July 8, 2021, she became the first Black American to win in the competition’s history. Shalini Shankar, a scholar of spelling bees, breaks down the importance of this historical moment.

Why is it news that an African American won this championship?

It’s significant because not so long ago, Black children would have faced a lot of obstacles just to compete in this spelling bee.

In fact, Black children were routinely sidelined from participating on the national stage until well after the passage of the 1964 Civil Rights Act. Even after schools were ordered to racially integrate in the late 1950s, spelling bees were largely all-white affairs, thanks to regional organizers who routinely found ways to keep interested Black children from advancing in the contest.

Avant-garde’s victory is also significant because, like with any sport, people love to celebrate new records. This one is especially welcome because with the exception of Jamaican Jody-Anne Maxwell’s win in 1998, the Scripps National Spelling Bee has never had a Black winner.

This can be attributed to decades of disadvantage in which Black schools had far fewer resources to help support and train students for activities like spelling bees. It may seem surprising, but specialized brain sports like the bee – and so many other kid contests today – require a great deal of expertise, such as spelling coaches.

What does it take to be a spelling bee champ?

Becoming a spelling bee champion requires several stars to align. First and foremost, one needs a love of the English language, especially philology – that’s the historical development of language – and etymology – the study of word origins and roots. Winners need an ability to build vast knowledge in these areas and summon it on demand in a competitive setting. Without this interest, the task of studying thousands of words per day, as elite spellers do, would be onerous at best.

Equally important, as I learned when researching my book “Beeline: What Spelling Bees Reveal about Generation Z’s New Path to Success,” is the parental support an aspirational speller receives in terms of day-to-day studying, expert coaching and access to commercial word lists and resources, such as those designed by coaching companies. The Scripps National Spelling Bee also distributes word lists. However, champions have told me that these are not extensive enough to address the increasing difficulty of the bee.

Zaila Avant-garde’s father realized her aptitude for spelling when she was around 10, which is relatively late for a contest in which eligibility ends after eighth grade, when most spellers are 14. Spellers I studied started competing as early as 6 or 7, making them far more comfortable with the format of the contest by age 10. Still, Zaila made astounding progress from her third-round elimination in 2019 which I witnessed in National Harbor, Maryland, when she misspelled the word “vagaries,” to winning it all in 2021. That kind of transformation suggests a tremendous work ethic, extraordinary aptitude and a whole lot of parental investment and support.

What will it take to see more bee champs from diverse backgrounds in the future?

The against-all-odds success story featured in the 2006 fictional film “Akeelah and the Bee” underscores how vital the role of adult support and resources are to success. Now we have Zaila and the bee, which will hopefully attract a new generation of Black talent.

An actual win – versus fictionalized win – should serve as real inspiration to younger people, because until now aspiring Black children had no trailblazer. I believe Zaila will be very inspirational, like Venus and Serena Williams have been to a new generation of Black women tennis champions.

What’s especially interesting about Zaila’s path to the bee was that her father observed how fantastic her skills were when they watched the 2017 Scripps National Spelling Bee together. This raw talent got her to the national contest but kept her far from the final rounds – until she and her father learned about commercial word lists.

In her post-win interview, she noted using commercial word lists from a company called “Spell-Pundit,” created by former elite spellers, which according to them allowed her to study 13,000 words per day. This is the kind of edge that one needs to win a bee today, and it is fantastic that she was able to acquire these products to aid in her successful preparation. Ensuring that others with raw talent like hers have access to paid coaching resources is vital to continued diversity in this field.

[Over 100,000 readers rely on The Conversation’s newsletter to understand the world. Sign up today.]

How do you start your own company?

Mon Jul 12 , 2021
Whether big or small, if you see something that people need, you can start a company. Tony Anderson/Stone via Getty Images How do you start your own company? Darryl Scriven, Clarkson University and Robyn Hannigan, Clarkson University Curious Kids is a series for children of all ages. If you have a […] 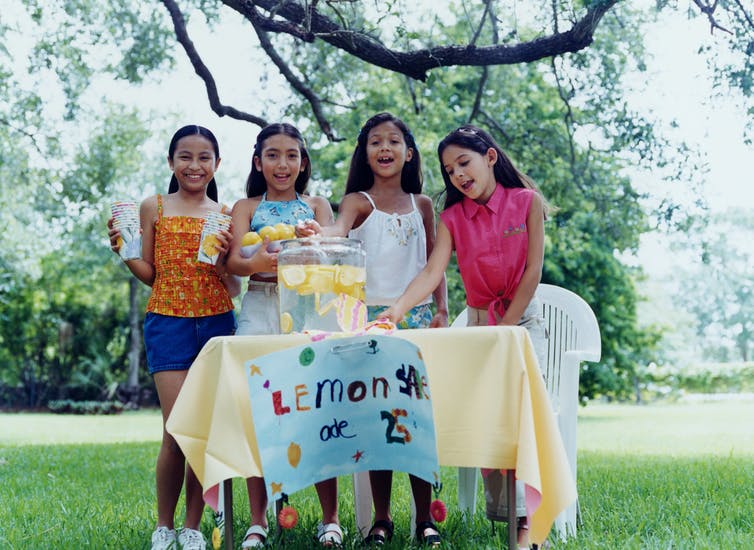